With the newest set of Pokemon cards, Rebel Clash, set to be released at the start of May 2020, we decided to take a look back at the original base set and touch on the most valuable cards from the set. Trainers everywhere are trying to get their hands on the secret rare cards like the Golden Quickball and popular Rainbow variants, but those aren't the only cards gaining value in the set. Read to on to find out which cards top the list as the most expensive cards in the Pokemon base set for Pokemon Sword and Shield. 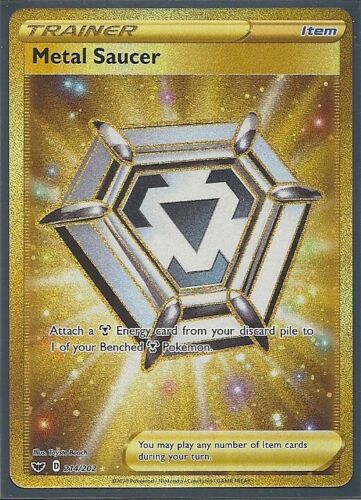 While the Pokemon Sword and Shield base set shows a total of 202 cards to the set, it was released with an additional 14 cards - many of which include gold variants of cards already in the set. The Golden Metal Saucer is an example of such a card.

The original Metal Saucer card is #170/202 and regarded as an uncommon card, whereas the Gold Metal Saucer is #214/202 and is regarded as a Secret Rare. Secret Rare cards are any of the Rainbow or Gold variants of cards that come after the deck supposedly ends at #202.

This card allows the player to attach a metal energy card from their discard pile to 1 of their benched pokemon. In addition, the player may play any number of item cards during their turn.

The Gold Metal Saucer card, at the time of writing, fetches a price of around $10.

The 9th card on our list is a long-time fan favorite, ever since this Pokemon appeared in the first generation. At #203/202, the very first secret card in the set, the Rainbow Lapras VMAX is the first rainbow card to make an appearance in the base set of Pokemon Sword and Shield card collection.

The secret Lapras VMAX Rainbow card has G-Max Pump, a 90+ power attack that does an additional 30 damage for each water energy that has been attached to this Pokemon card.

The Rainbow Lapras VMAX card, at the time of writing, fetches a price of around $11.20. 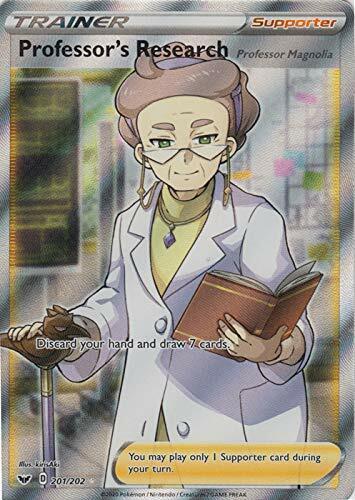 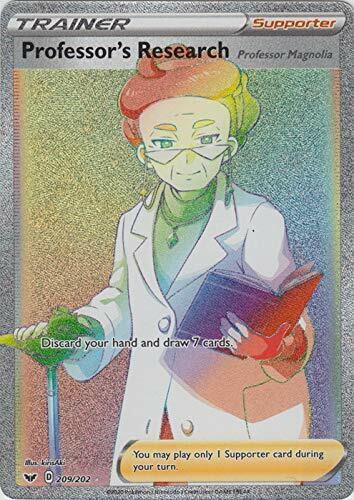 Although Professor Magnolia may not be as popular as the other characters from Pokemon Sword and Shield, this card owes a lot of its value to the utility it offers players in the trading card game.

This card gives the player the chance to discard their hand and to draw 7 cards, effectively resetting their hand and potentially providing a nice advantage going forward.

The Professor's Research (Full Art / Rainbow) card, at the time of writing, fetches a price of around $12-$14. 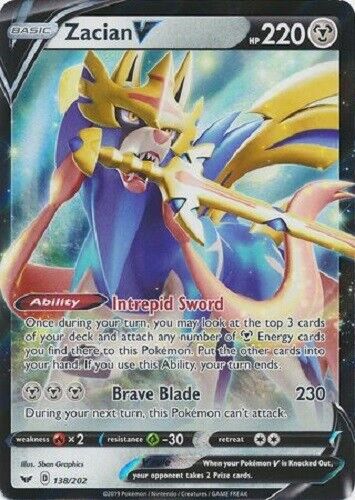 At #7 on our list is the popular sword-wielding canine Zacian, one of the legendaries featured in Sword and Shield. This is the V version of Zacian, and as you may have guessed, will not be the only time Zacian is featured on this list.

Zacian is an extremely popular card for the Pokemon trading card game because of the insane 230 power attack Brave Blade, as well as the ability Intrepid Sword which allows the user to look at the top 3 cards of their deck and attach any number of metal energy cards to Zacian.

Collectors also enjoy Zacian cards because of their legendary status, making Zacian V a desirable card for several buyers, whether they are looking to play the game or just collect.

The Zacian V card, at the time of writing, fetches a price of around $15. 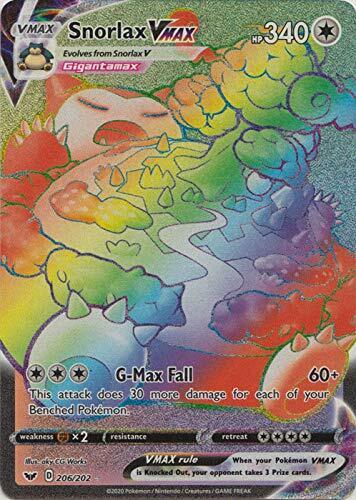 Next on our list is the VMAX Rainbow version of Snorlax - another Pokemon featured from the first generation of the series. This Rainbow variant comes in at #206/202, and offers a lot of collectible value as well as gaming.

This Snorlax VMAX Rainbow card offers an impressive 340 HP making it a great tanking option. Additionally, the attack G-Max Fall does 60 damage and gains 30 additional damage for each of the user's benched Pokemon, making for a potentially very powerful attacker.

The artwork on the card features the Gigantamax version of Snorlax, adding a lot of value for collectors who might be looking to collect all the Gigantamax Pokemon from the series.

The Snorlax VMAX (Rainbow) card, at the time of writing, fetches a price of around $16. 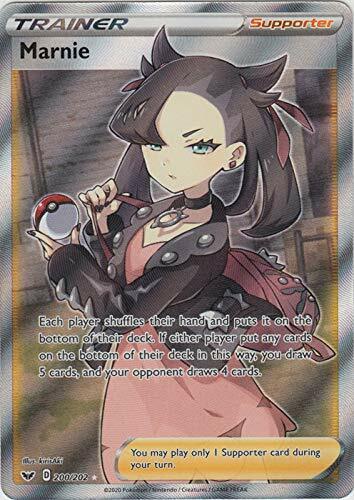 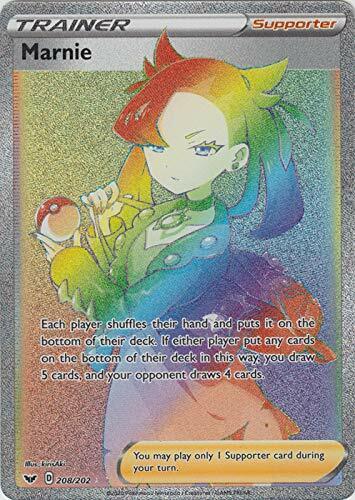 Marnie quickly became a fan-favorite rival from Pokemon Sword and Shield, and it is no surprise that the full-art and rainbow versions of these cards are quickly gaining in value.

Marnie also makes her appearance at #169 in the set, and even as a non-holo card can fetch a few dollars online. The full-art and rainbow versions of course make for much better pulls, and collectors are rapidly buying up these cards on eBay.

This marks the end of "human" Trainers featured in this set, although we wonder if contenders like #207 secret Rainbow Bede might one day climb in price. 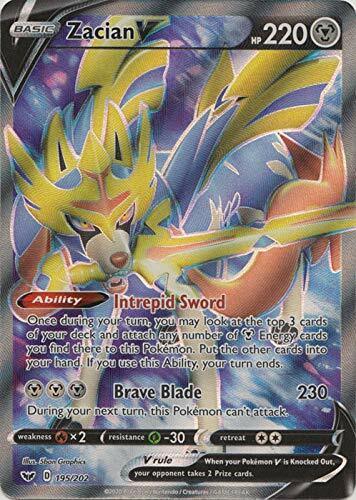 Zacian once again makes the list at #4, but this time in full-art fashion. The Zacian V full-art version is number 195 in the set, and is one of the most sought after cards in the collection.

This ultra-rare pull is the most expensive ultra-rare on the list, barely outperforming Marnie in value at the time of writing. This card features the same 230 power attack Brave Blade which makes Zacian a great choice for TCG players.

Beyond this ultra-rare we start breaking into the expensive gold variants which are some of the most difficult cards to pull from the collection!

The Zacian V (Full Art) card, at the time of writing, fetches a price of around $22. 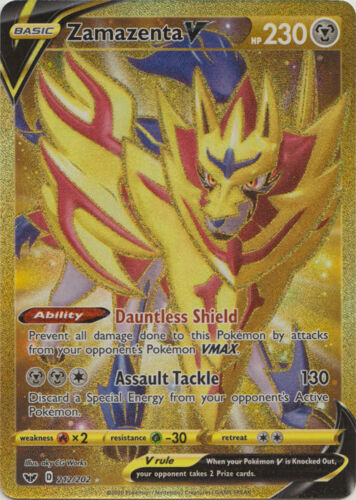 Although the Zamazenta V Full-Art version of the card (#196/202) fetches around $8 currently and almost makes our list, it's no where near the gold variant which takes its place on our list at #3. While this card may not see the same utility in the TCG universe as Zacian, it still offers a tremendous amount of collectible value.

As #212/202, the gold Zamazenta V card is one of a few secret rares in the set. Collectors have a lot to like about this card - whether it is because it is a hard to pull V, features one of the new legendary Pokemon, or is a secret-rare gold card.

We tend to wonder if #3 on our list may overtake #2 in the future!

The Gold Zamazenta V card, at the time of writing, fetches a price of around $25.

Players of Pokemon Sword and Shield for the Nintendo Switch will quickly recognize the design of the Quick Ball, considering they probably used 300 of them at the end of their playthrough.

In addition to offering tremendous utility in the game, it also is a great card to use in the TCG universe. This card allows you to search your deck for a Basic Pokemon, reveal it, and put it into your hand.

This card also is highly collectible since some collectors enjoy specifically collecting Pokeball cards. This card likely will be a big pick for collectors in the future, especially since it is the final card in the set, #216/202.

The Gold Quickball card, at the time of writing, fetches a price of around $30. 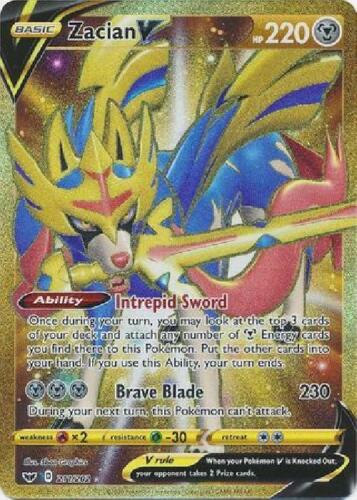 I'm certain you could've seen it coming, but the best card from the original Pokemon base set for Sword and Shield is the Zacian V gold secret rare variant. Considering we've discussed Zacian cards a few times already, I'm guessing you know why.

This is currently the most expensive card in the set - featuring one of the strongest options for the TCG, a special gold variant for collectors, and a sought-after Legendary Pokemon for all fans of the series.

The Gold Zacian V card, at the time of writing, fetches a price of around $44, although some recent transactions have gotten as high as $70. We definitely think this card could go down long-term as the most valuable card in the set.

Please note that any purchases made through links in recommendations or ads may earn our company commission.